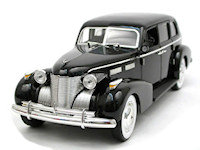 In 1957, New Jersey started issuing plates in the national standard size of 6 by 12 inches.
Standard passenger plates were issued in the A/A 0000 format, usually starting at number 1000.
(A few counties issued some A/A 0000 format plates on the large size between 1952 and 1956 - in this case the 1957 issues started where these left off.)

In the middle of 1958, the county code system broke down, and existing county-coded plates were issued to whatever motor vehicle office required them.
The FA-FZ and RA-RZ series were also issued statewide. Not sure if any were issued to their respective counties (Essex and Bergen) before they were distributed throughout the state.

The IA-IZ, JA-JZ, NA-NZ, and YA-YZ prefixes (grayed out in the list above) were never issued in A/A 0000 format,
but they were used on plates remade with numbers from the 1952 base.
Info from Jack Hollingsworth
1957 - 1959A/A 0000
These plates were issued until 1959, when the replate to the tan base AAA-000 format plates started.
These plates remained valid (along with the 1952-base plates) until they were replaced. (The replate was complete by January 1961.)
All plates on the road were validated with windshield stickers.

The I, J, N, and Y prefixes were *only* issued on remake plates.
They were not issued in the A/A 0000 numbering format.

This plate is a very late remake - from the damage to the plate you can see it was made on a TAN blank with the newer 1959 dies.
So this plate was made very close to the changeover to the 1959 base.
Notice, it has boltholes instead of bolt slots. This is another indication that it's made on a 1959 blank.
This is the only plate like this that we know of.
Dave Zullo