Passenger Plates
1959 - 1969
Starting in June 1959, New Jersey started a replate with this new black on "buff" base.
All plates issued from this point forward are still valid on the roads today. 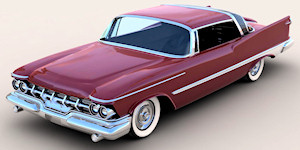 A number of B-series plates were made in Arkansas.   Notice the different "B" die on the plates below - the Arkansas "B" does not have serifs.
BBB-991 has *both* types of B dies. The origin of this plate is unknown.

There is another series of Arkansas 'B' plates starting between BES and BEX, and extending through the rest of the BE, BF, BG, BH, BI, and some BJ prefixes.

Somewhere between BJA and BJL, production returned to New Jersey.   The different 'B' die without serifs was not seen after this.

The "D" series was reserved
for DEALER plates.

The "O" series was reserved
for OMNIBUS plates.