NEW PLATES for 2016
These plates were either introduced or first seen in 2016. 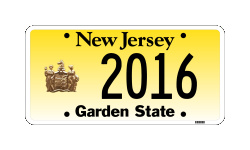 The MVC is starting to "colorize" the logos of some of the organizational and military plates.
So far, there are 7 plates with new logos which have appeared in 2016.
Images generated by me.

Also, 2 new NASCAR plates were introduced - both for drivers who already had plates, but they switched car numbers.
Images generated by me.