NON-PASSENGER STICKERS Between 1960 and 2010 most non-passenger plates were issued registration stickers. 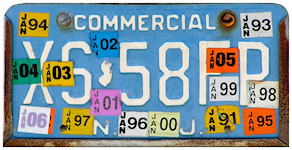 From 1960 to 1969 most stickers had a 6-digit serial number, but stickers for tractor and trailer plates started with a "T" followed by 6 digits.

Starting in 1971, the "T" was dropped and all stickers only had the 6 digit serial number.

There were no stickers dated 1972.
Stickers switched from date-of-validity to date-of-expiration and new stickers reading MAR 73 were issued in 1972 to expire at the end of March 1973.
Non-passenger stickers initially expired in March of every year, but other months were added over time.   A variety of fonts were used from this point forward.

The serial number was dropped during 1984.

All the sticker pictures above were enhanced from the originals to show detail - but follow exactly the original styles, fonts, and relative sizing.
Several years had multiple fonts (probably due to multiple print runs) and all the known variations/styles are shown.

From 2012 to 2014 only MAR stickers were issued - these were for 4-year trailer registrations and trailers always got March expirations.
Photoshop

From 1960 to approximately 1970, flat aluminum tabs were issued to be used on reflectorized trailer plates.
Evidently, stickers did not adhere to the plates too well, so tabs were used to hold the sticker.

Go to the Tabs page to see more examples of these tabs.

Here is a die used to print APR 04 non-passenger stickers.