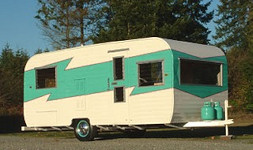 All of the plates up to TZZ and then from TAA as high as TKC-384 used experimental reflective sheeting.
They usually used blank metal tabs with the sticker(s) attached.
There are listed in alpha order on this page.

This plate was made by putting the reflective sheeting on a black painted aluminum base plate - from the late issue 1957 base.
This is the only one known with a black back side ... but there may be more.
Dave Zullo

This plate is an anomaly - it's a TG- series (which should have been issued around 1967), but it has a natural 1960 tab.
The source of this plate said that the tab was original to the plate.
Either way, I wanted to include it here. Dave Zullo

In mid-1970, the reflectorization was changed somewhere between TKE and TKH.   The tab slots went away at this point as well ... sort of :-)
It looks like these reflective plates from TK? to TNZ had clearcoat applied on top of the same reflective sheeting that was used previously.
Thanks to Dave Zullo for the info on the reflectorization of these plates.

REFLECTORIZED and the sheeting is
over a blank with TAB SLOTS !!

Starting with the TOA series, reflectorization was dropped, and regular painted plates were used.