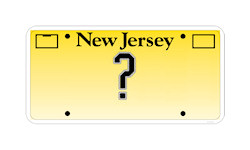 This one is weird ... the 'New Jersey' is on the bottom !
There was no Lieutenant Governor during 1979-1992 (when this plate would have been issued), so I'm not really sure what it is.
Paul Rosenberg

I honestly don't know if this one is real or not. It came from one of those "goofy vanity plate" articles,
and it doesn't seem to have been photoshopped, but the original picture was really too small to tell.
Either way, it's funny !
Frank Kan