NJ BEACH BUGGY ASSOCIATION These plates are issued to members of the NJBBA for member identification.
Each plate bears the membership number of the owner. 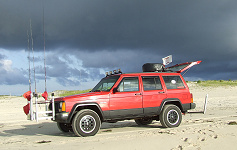 Incorporated in 1954, the New Jersey Beach Buggy Association is an organization dedicated to the preservation of New Jersey's beaches.
They are involved in beach protection and preservation projects, and they also run charitable events to raise funds to help keep beaches open for everyone.
Learn more about the NJBBA on their web site.

Thank you to NJBBA Membership Secretary Ken Hollins (#23) for the vehicle pictures, and the all of the new information on this page.

Sometime in the 1980s (?), some of these cool cast aluminum plates were made to order by one of the BBA members.
(we're not sure which member, which numbers, or how many were made.)

In 1984, annual issues were replaced by a semi-premanent plate which received stickers for the years of validity (or special stickers for different member classes).
This corresponded with the 30th anniversary of the NJBBA.

Starting in 1988, thinner aluminum plates were issued with a new slogan. Stickers were still used to renew these plates.
This base features a graphic representation of the NJBBA mascot car (see below for pictures of the actual car!)

I learned in November 2017, upon corresponding with the NJBBA Membership Secretary, that they never issued any license plates with leading zeroes.
So the plates below are now classified as FAKE by the NJBBA.

Even though the plate uses the same dies and blanks as actual plates, the NJBBA did not commission manufacture of any leading-zero plates.
Thank you Ken (NJBBA #23) for investigating the leading-zero plates and providing this information !

Around 2005, plates started using vinyl numbers instead of embossed numbers due to the rising cost of embossed plates. 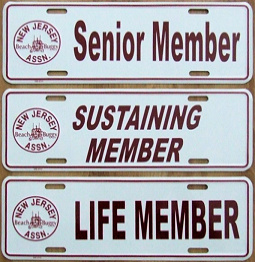 The NJBBA Mascot is a 1931 Model A Beach Buggy - it bears current NJBBA license plate "MASCOT", and it is still used on the beach at special events. 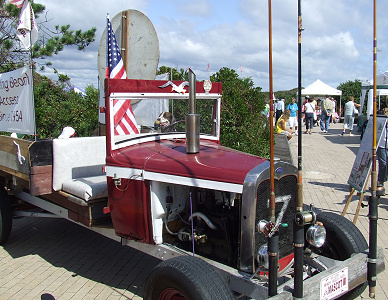 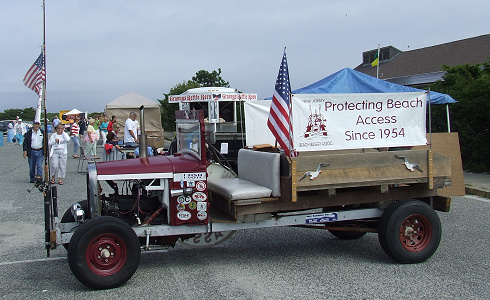