CONTRACTOR EQUIPMENT IN TRANSIT 1994- Equipment in Transit plates are issued to construction companies for vehicles used mostly on construction sites, although any vehicle with these plates can drive on regular roads.
They are issued in groups of 5 - each plate has a small suffix (vehicle) number.

NJ MAPS ON EQUIPMENT PLATES
EQUIPMENT plates are the only ones ever to use TWO of the little NJ map separators on the same plate.
The die for the NJ map changed around 1992 - it became smaller and less precise.

As a result of having different map dies, some EQUIPMENT plates have mixed map dies - one of each map on the same plate.
Several of the 1992-base plates below have mixed maps.
1992 BASEPA-10 - W?-99
(Q and T series not issued)
Below is a full set of PC-21 plates - vehicle numbers 1 through 5.
These were probably issued in 1994.

The changeover to the Avery base occurred between WN and WU.
AVERY BASEW?-10 - Y?-99
(X series not issued)

As of October 2010, plate stickers were no longer issued.   All NJ plates are now undated.
HELIX BASE

The D series was skipped.

2013Last plate in the EK series

2014 FLAT BASE10-FH? -
The flat base first appeared in April 2015.   The spacing is different from previous - there is extra space around the vehicle number in the middle.

2017First plate in the GL series

REMAKES
Because this is the only one of these I've ever seen, I thought I'd put it by itself.
Below is a picture of a remake of CP-78-4, a number first issued in 1974.

The remake is on a graphic base (not sure which one).
I included a picture of it on the tractor. 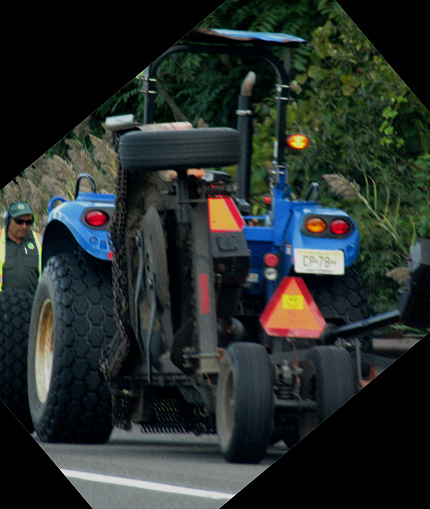