NON-RESIDENT TEMPORARY PLATES 2021- Starting November 30, 2021, the design of the temporary plates was changed.
The font for the serial number is different, and the expiration date is much larger. 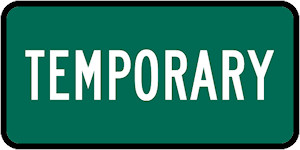 NON-RESIDENT - 30-day Expiration
The first new style temps were issued on November 30th to expire on December 29, 2021, and used a Times New Roman (!) font for the serial number.
The barcode was replaced by a QR code ... it comes out large on most temps, but there are tiny QR codes on some of them.

The numbering on these started somewhere after 262918T (which is the highest old non-resident temp spotted).

The Times New Roman font went away after only 2 months ... and then they decided to use Arial for the serial number.
The expiration date got a little smaller, and everything else basically stayed the same.

The first known temps of this design appeared on February 1st, expiring on March 2nd.