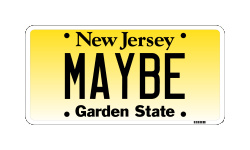 2017 - SUPPORT RECOVERY
In 2017, a bill was introduced to create a "Support Recovery" (from drug addiction)
license plate, and the funds would be used to help facilities, housing, and the general needs of recovering addicts.

Included is a (pretty lame) mock-up of the proposed design ... featuring a compass (to keep you on the straight an narrow?).
Thanks to Jon Cohen and Joe Pugliese for reminding me about this plate.

2017 - VETERAN MOTORCYCLE
In June 2017, a bill was introduced to create special Veteran license plates for motorcycles.
No example images are known, and these plates have not been seen on the road yet.
2018 - GARDEN STATE EQUALITY
Looks like we may have a new plate soon promoting equality in the Garden State.   If so, will NJ be the first state with one of these ?

There was a survey online to see which design people like the best.
Below are the proposed design choices, as presented in the survey.

Update: apparently they went with a variation of the proposed designs.
So supposedly the design below will get released, but I have not seen any on the road yet - as of the end of 2018.
[Still nothing ... as of May 2020.]

2018 - DELTA SIGMA THETA
In August 2018, a bill was introduced to create special plates for members of the Delta Sigma Theta sorority.
No example images are known, and these plates have not been seen on the road yet.
2019 - STATE ANIMAL
In November 2019, bill A-4800 was introduced to create special plates featuring the NJ state animal, the horse.
A proposed design is below.

2020 - BLUE PLATES
In November 2020, there was a surge of news articles about a bill introduced to bring back the "retro" blue plates which were issued from 1979 to 1991.
There were no pictures of the proposed retro plates, but I have a good imagination :-)

If they were produced as flat plates, with a reflective blue background, they might look something like my mockup below.