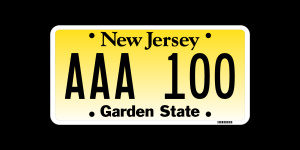 In New Jersey, any plate issued since 1959 is still potentially valid, and can be used on the road if it has been continuously registered to a vehicle since it was first issued.
If a plate is no longer registered, it cannot be re-issued as a regular passenger plate, but apparently old number combinations can be requested as vanity plates - if they are old enough and are not currently in use.